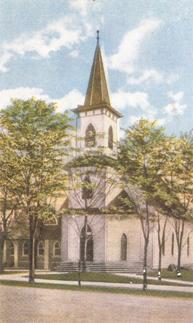 The Fort Valley Baptist Church was organized August 21, 1852, with seven members who met twice a month in a downtown warehouse with the Rev. J.W. Attaway as pastor. A permanent site on the corner of Miller and College Street was purchased in 1856 and a new building was dedicated two years later.

As the years passed the church grew in physical facilities and membership.  In 1901, 107 Baptists dedicated a new sanctuary and eight years later 165 members built a Sunday School annex.  In 1935 while Rev. Marion D. Reed was pastor, the church building was destroyed in a fire.

The present sanctuary was started in 1936 and worship was resumed there even though the interior of the building was not completed until the end of World War II.  An educational building was completed in 1955 while Rev. Norman Hodges was pastor.

As the membership of First Baptist grew, additional properties surrounding the church were purchased to provide additional parking space.  In 2000 the church dedicated a new fellowship hall and educational building.

First Baptist Fort Valley has a wonderful legacy of faithfulness on which God is building a bright future as we work together to bring glory to the Name of Jesus Christ throughout all of Middle Georgia.